There are concerns about how some families with young children have begun to abandon social distancing guidelines. Pediatricians see benefits and costs.

Even though some parents have relaxed their concerns about the coronavirus and some families with young children have begun to abandon social distancing guidelines and venture out more often, Dr. Sarah Gard Lazarus, a pediatric emergency room physician, has stood her ground.

Lazarus, one of the AJT’s “40 Under 40” last year, still recommends that parents keep their children home.

But following social distancing guidelines, as critical as they are, maybe creating other health issues. On Wed., May 20, the same academy of pediatricians that originally issued the distancing recommendations launched a nationwide campaign to get more children out of their home and into their doctor’s offices for their shots.

The president of the American Academy of Pediatricians, Dr. Sara Goza, who practices in Fayetteville, Ga., argues that while it’s important to practice safe distancing, it’s also important to make sure children are up to date on their scheduled vaccinations. 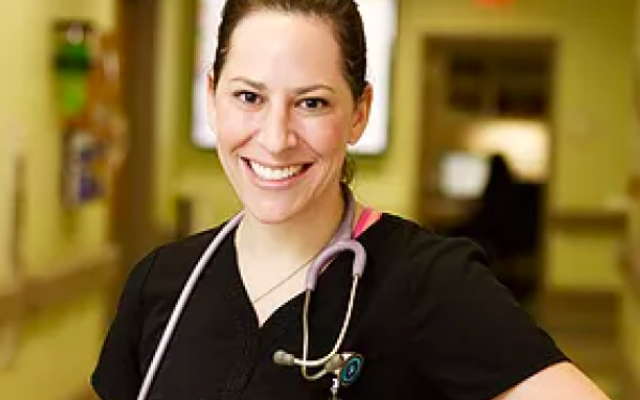 Dr. Sarah Gard Lazarus is a pediatric emergency room doctor who was one of the AJT’s 40 Under 40 nominees for 2019.

“As states begin to open up and families move about in their community, we are afraid that we could see outbreaks of measles, whooping cough and other diseases that can spread very rapidly and be deadly for children.”

Earlier this month the Centers for Disease Control and Prevention published a study that showed that doctors in the Vaccines for Children program had ordered 2.5 million fewer doses of vaccines between mid-March and mid-April than during the same period last year

Doctors who specialize in the treatment of children point out that they should receive vaccinations early. In the first 15 months of life, children may receive up to 25 shots, including five new vaccines that have been introduced since 1995.

Still, the pediatric physician’s group, advises on its website that keeping children away from each other and keeping them away from adults is what is most important today. Children are still at risk, the doctors said, even though for some reason they have had a much lower incidence of the viral infection than adults, and therefore may be less contagious.

“Staying home and physical distancing is still the best way to protect your family from COVID-19,” Dr. Corian Cross of the Academy wrote on the AAP website,

“Especially for younger children who may not understand why they can’t run up toward other people or touch things they shouldn’t, it’s best to keep them home.”

It is advice Dr. Lazarus endorses in her own home for her 6-year-old twin boys.

“I am following the American Academy of Pediatrics recommendations, which is to try to limit engagement, and that any child that’s over age 2 and not at least 6 feet apart, is wearing a mask.”

But she admits that it is difficult and she worries that the virus is not only taking a toll on preventative physical health care but on the psychological health of children who have spent weeks at home, away from school and social activities.

“I’ve seen a big increase in depression and behavioral concerns among children in the emergency room. In general, it does seem like we are proportionately seeing a higher number of kids with behavioral health problems, depression, anxiety, suicidal ideation, drug use, all being part of that.”

Lazarus is also troubled by the psychological effect that the COVID-19 pandemic is having on her. Even during ordinary times, female physicians face much higher rates of depression than the general population, according to Medical Economics magazine.

When she comes home from the hospital, her children are old enough to know that they must keep their distance. They know that she could be contaminated, she said. Lazarus also acknowledges that it is hard for grandparents and other relatives are not able to readily hug children as they would ordinarily.

“So technically there should be social distancing. With our family it’s a risk-benefit analysis. My mother, on her birthday, really wanted to hug both my children and me. And that was a risk she was willing to take that I was nervous about. We don’t know what that means. We don’t know what a lot of this means. So it’s all a risk-benefit analysis.”

Every day, she points out, adults confront their fears and make a choice. It’s also something she must recognize while she is treating children in the hospital.

“I always considered myself a very warm doctor. I like to give hugs and to pick up babies and snuggle them. And that’s always been something that’s both rewarding to me and that the patient seemed to be responsive to. But now I can’t do what I would typically do to give parents or children the comfort that they usually get. For me, it has been very challenging.”